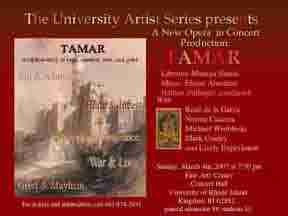 ACT I, SCENE 1 - PRELUDE - King's Bedchamber
King David is old, wizened, near death. He sings his first aria, recalling his glory. The Shepherd Boy sings in a soulful voice the twenty-third psalm.
ACT I, SCENE 2 The Harem (choir).
A number of women from the very old to adolescent girls, occupy the room. They sing about their roles in the Harem as queens and concubines, and about their children, live and dead. Bathsheba, stands apart from the others, and sings the King's love for her. She describes the dichotomy of the King's personality: a poet and dreamer, but also a sinner and warrior.
ACT I, SCENE 3 - King's Bedchamber (The curse)
Beautiful Abishag sings her aria "What a strange history steeps the house and rule of David: such intrigues! Such victories, and such a long trail of blood..." Suddenly there's a clamorous sound. The King asks: "Who goes there? And who dares approach the King in his chamber?" The Ghost of Tamar appears before the startled King and Abishag. Her hair hangs disheveled about her face. Tamar sings her first Aria, a curse, in which she blames the King, her father, for all the misfortune and grief that have struck their family.

ACT II, SCENE 1 - Inner Palace Courtyard
Absalom and Tamar are playing cards. She tells Absalom: "Amnon asked for my hand in marriage, and I merely laughed at his proposal." Absalom replies: "I see a cold fire burning in Amnon's eyes when he gazes upon you, and his fuming silences disturb me." Amnon claps his hands and Jonadab appears. Amnon reveals to his friend his secret love for his half-sister Tamar. Jonadab helps Amnon forge a treacherous plan to lure the princess: she will make cakes for a seemingly ill Amnon.
ACT II, SCENE 2 - Amnon's Bedchamber (Rape scene)
Amnon is looking ill. He is chanting a psalm to God sotto voce, when Tamar enters with a tray of cakes. Amnon unveils to her the true reason of his "sickness." "I'll be forthright: I must have you! You're the source of all my suffering." Tamar abruptly backs away from Amnon: "You must be mad! How dare you trick me here to propose this vile thing"! Amnon grabs Tamar by both wrists: she tries unsuccessfully to pull away from him, and cries out in pain. The room darkens while, simultaneously, the sound of Tamar's muffled sobbing grows louder and louder.
ACT II, SCENE 3 - Amnon's Bedchamber.
Tamar begs Amnon to protect her. He sends Tamar to the streets: "Why's that wretched girl still here? (...) Your filthy tears soil my floor-- Get out! And sell yourself to strangers, like a proper whore!"
King David raises his arms to God, and sings an ARIA. Tamar joins King David for the following DUET of despair: "Why did a father's love divide itself? Why did a child's loss become his gain? How can man or woman praise God, when the world reels with ?"

ACT III, SCENE 1 - The Jerusalem Palace (exterior wall & gate)
Three years have passed. Absalom has killed Amnon, and has been exiled by King David. He is returning to Jerusalem, ready for battle. Tamar tells Absalom of her fear to loose him or to loose her father. They sing a duet: "Sister, brother, there is a chasm opening and deepening before us..."
The women from the Harem enter, and start singing: "How has war ever triumphed? Do the dead ever deliver joy? How can brothers fight each other? How can a son attack his father?"
ACT III, SCENE 2 - The Forest (outside Mahanaim)
Joab shoots an arrow into Absalom's breast and kills him: "May your death be swift Absalom, for your betrayal of a father, a country!" King David weeps, and sings his final Aria: "Oh my son Absalom, my son, my son (...) my terrible Absalom!" Tamar sings her final ARIA : "So, father, you have witnessed your history again. (...) Remember how you abandoned Tamar..."
ACT III, SCENE 3 - King's Bedchamber (Final chorus)
Abishag sings her final, sad ARIA. "This flood of memories makes me tremble; it makes me grow quiet. Where are his beautiful wives--Bathsheba, Micah, and Abigail". The Final Chorus is sung by all the singers and the Harem Chorus (joined by all of Lively experiment singers): "How long will Thou forget us, oh Lord? How long will Thou hide Thy face from us?.. Oh, spare us that we may recover strength, before we go hence and be no more."

With the participation of Lively Experiment.
Lively Experiment is an experimental choir created by M. Conley, and dedicated to performing challenging and exciting music from all times and places. 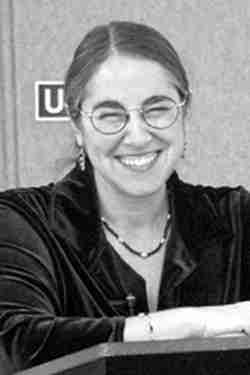 Maurya Simon is the author of The Enchanted Room and Days of Awe (Copper Canyon Press, 1986, 1989), Speaking in Tongues (Gibbs Smith, 1990), which was nominated for a Pulitzer Prize, and The Golden Labyrinth (University of Missouri Press, 1995). A fifth volume, A Brief History of Punctuation, was published in a limited edition by the fine letter-press book publisher, Sutton Hoo Press, in 2002. Simon's sixth volume, Ghost Orchid (Red Hen Press, 2004) was nominated for a 2004 National Book Award in Poetry...